Horrified but not Surprised: UNIS Students React to the Storming of the Capitol 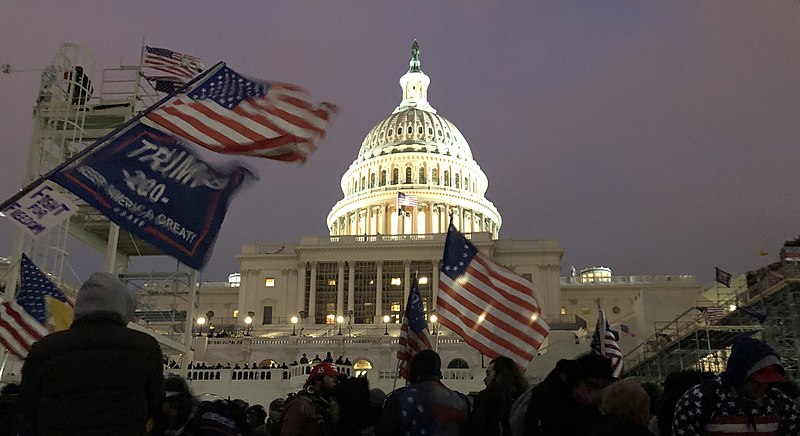 The attack on the Capitol on January 6th could have been straight out of a Black Mirror episode. Unfortunately, the events were all too real. Two thousand people, deluded by conspiracy theories, violently stormed the building in an attempt to overturn the election results. All over the world, people recoiled in horror at this live-streamed display of the country’s alt-right underbelly. UNIS students, too, reacted with shock. Here’s what some of them had to say:

“I definitely expected something to happen on that day, but I didn’t think it would be so extreme. I guess it was foolish not to expect this base to go to such lengths. When you listen to some conservatives speak, you can see that storming the Capitol has been part of an alt-right fantasy ever since Obama took office. I think this incident is just the beginning of future attacks; there may even be one planned for Biden’s inauguration day. I don’t love making comparisons between current events and history, but if you look back to Nazi Germany or fascist Italy, you can find these ‘dress rehearsals’ for future, larger anti-democracy events. The storming of the Capitol could be an indication of what’s to come. I don’t see how these divisions are going to go away any time soon, and it’s up to the future administration and the American people to figure out how to reconcile these different factions of the country.”

“I don’t think I even fully processed what was happening on January 6th. I saw images of a giant crowd of unmasked Trump supporters and was immediately terrified and nervous about what could happen. I was also taken back by how little law enforcement was present, especially in comparison to the BLM protests. I have grown up in a Jewish household. Although I have not practiced Judaism that much throughout my life, the anti-Semitic gear that some of the rioters wore horrified me. What terrified me even more is that those responsible for the attempted coup are from all over America. To me, this suggests that we could very well be living amongst people with such hateful and violent mindsets, which scares me a lot. I think the world and the US have finally woken up to just how dangerous Trump is to the US, both to the common person and to those who represent us. The Republican Party will also have to figure out where they want to go from here and what their values are. Will they support an unhinged President’s legacy in the name of solidarity, or will they adopt a much-needed course-correction?”

“My main reaction to the recent attack on the Capitol was that of shock. The events which occurred on that day were signs of a disorganized, unstructured society, even an anarchy. These are adjectives that I could not envision being used to describe the US five years ago. I have to point out that maybe the most ‘un-American’ event that occurred was that an American president endorsed an attack on the Capitol, an establishment that represents the democracy of America. The President’s actions can very much be looked at as an attack on the democracy of this nation. As a person of Nigerian origin, I juxtapose this incident with what’s going on there with regard to the EndSARS movement. These Nigerian youths are opposing an authoritarian government and calling for democratic reform. In the case of the storming of the Capitol, these groups were opposing democracy in its entirety rather than fighting for it.”

“I was appalled when I first saw news of the storming. I never imagined that the very people who preached most about the importance of American traditions would be the ones who would end up dishonoring them. I’m not originally from here, and I can tell you that outside of the US, people find it really ironic and a bit sad since America is always advertised as the greatest symbol of democratic government. Still, I don’t think this raid is exactly ‘un-American’; it actually shows the true colors of this country right now. This event will forever stain history and should be a reference point for meaningful change. The American government needs to truly take a step back and examine the country from the inside out. As new leadership takes over from Inauguration Day onwards, it’s time for America to decide what kind of legacy it wants to build.”

“When I first heard about the rioting, I wasn’t really surprised. There was a lot of preparation for this kind of event before the election among Trump’s most fanatic supporters. The difference in police response in comparison to the BLM protests further cements the idea that white supremacy is what this country was built on and will continue to grow on. Yes, some people from the insurrection were arrested, but will they be convicted? Also, the fact that federal workers, mostly of color, were cleaning up after those people is very telling. These rioters didn’t have to think about even the smallest consequences of their treason, which is disgusting to me. I think there needs to be fundamental change to avoid an incident like this happening again. In classrooms, the idea of ‘revolution’ is romanticized because that’s how the US gained independence. This enabled and legitimized the January 6th insurrection and allowed participants to act in the name of ‘patriotism.'”

“I was really disappointed in not only the people that thought it was okay to storm the Capitol but also in how Trump handled it. Still, it wasn’t exactly surprising. I was also angry that the police did very little until it was too late. This is in a sadly stark contrast to the BLM protests, where people were getting abused simply for peacefully protesting. I’ve lived in the Middle East, and a lot of my Palestinian friends were texting me to make sure I was safe. That reminded me of the ramifications of Trump’s presidency and of this event all over the world. I think that all we can do is take steps to first undo the damage that has been done and work to make sure that nothing like this can ever happen again. Now there’s nowhere to hide; the absurdity of Trump’s presidency and the true colors of his fan base have really been brought to light.”

“My immediate response to what happened at the Capitol was confusion and shock that this was allowed to happen. Staff at the Capitol seemed really underprepared, and it was almost too easy for the rioters to get in. I saw a really interesting Tweet that said ‘to be able to unite we have to heal and to be able to heal we have to prosecute.’ Once we put an end to this chapter, we can begin to heal from it, but we can’t move on until the matter is fully closed. The long-term impact of this event is the fact that unfounded backlash against election results could be dangerously normalized at high levels of governance. I believe Chuck Schumer said that January 6th will live in perhaps more infamy than the day of the Pearl Harbor bombing because unlike that day, where we were bombed by a foreign country, on January 6, bombs were planted in the Capitol by Americans. It’s a symbol that some of our very own citizens are trying to destroy our country from within.”
****
Undoubtedly, the atrocities of January 6th have made it impossible to ignore the consequences of fomenting division. As more and more leaders come together to condemn the riot, it becomes clear that the perpetrators may actually have succeeded in bringing the two political parties just a little closer. UNIS students hope for a peaceful transition to the Biden administration and know, as future voters, that justice, equality, and tolerance are always worth fighting for.