The Impact of SAT Cancellations on the College Admission Process 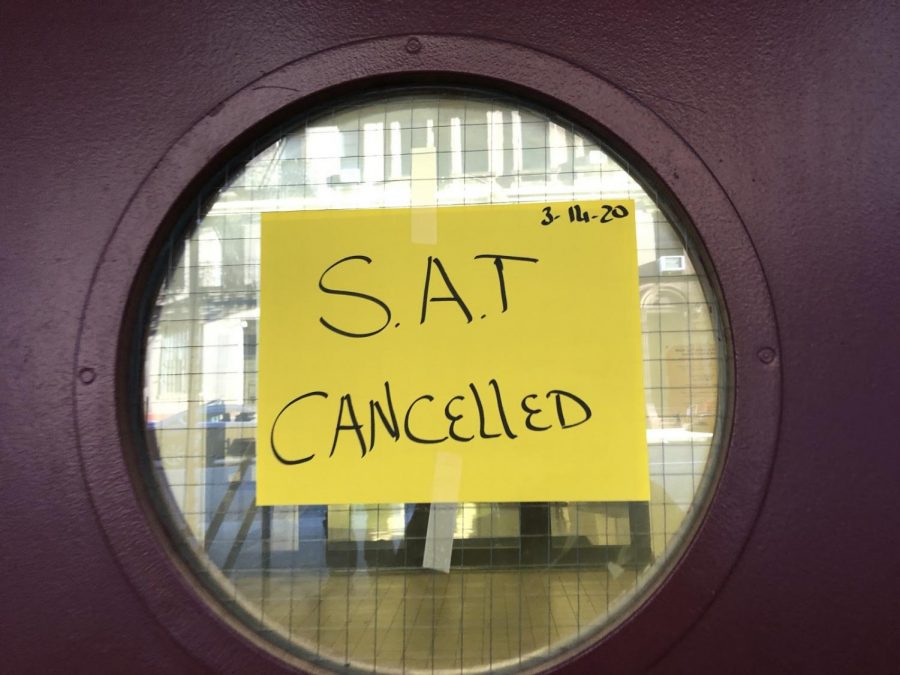 On March 14, Saturday morning, I woke up early, ate a good breakfast, and did a practice passage before leaving to take my first SAT as a T3 student. Upon arriving, I saw a small crowd outside the Park West High School. On the doors of the school there were two signs: one typed and one handwritten, saying, “SAT cancelled”. There was no email or notice sent and no one available to explain the situation, but it was obvious that it was due to the spreading of COVID-19 in New York City.

The school I was meant to test at was an alternative for some students whose schools had closed and instead took the longer journey to Manhattan. One student exclaimed with frustration, “I called them yesterday, they said they were open!” Slowly, people started to leave as soon as they had arrived. As I walked away, I saw other teenagers confidently strolling in the direction of the school, unbeknownst of the cancellation.

A number of schools started closing due to COVID-19 in New Jersey and New York in March. Students whose SAT’s were cancelled in March signed up quickly for the May SAT, only to learn that all May SAT’s had been cancelled as well. According to the Wall Street Journal, tests were also closed for international students in Italy, Japan, Egypt, and Hong Kong. The nearest test-date was June 3rd, 2020. There was also the question of refunds. The College Board website stated that those registered for March would receive refunds within the next few weeks. There is yet to be an update on the refunds. Many first-year IB students were aiming to take the test in March before their senior year, as recommended due to the intensity of the IB Program; I was one of them. By postponing the test, chances of superscoring also became limited as students who were planning to take it in March had to rely on the June or May sittings to maximize their score. In addition, some students across the country are certainly planning to apply for early decision or early action, which implies a tight deadline that allows for minimal leeway.

Returning to school after the nature of COVID-19 will be a sudden increase in workload to keep up with the IB and overall college process. Many colleges today are test-optional, but not all. The epidemic of COVID-19 is being taken into consideration by universities to become test-optional. The College Board website states that they “have notified higher education institutions and [the colleges] are also closely monitoring the rapidly evolving coronavirus situation.” Last year, the University of Chicago went test-optional. Bard College, St. Lawrence University, Mount Holyoke, and Skidmore College are some further examples of test-optional schools. In general, liberal art colleges are more likely to be test-optional.

Furthermore, this situation questions the credibility of the SAT’s, as last year there was the College Admissions Scandal of 2019, which involved colleges such as the University of Southern California, where students’ parents paid to have their SAT scores faked or have extra help by proctors. This reveals another problem that arises: the amount of money spent preparing for the SAT, which gives certain students an edge at being accepted into their university of choice. Students whose parents can afford it, pay for tutoring programs and other studying resources. Studies show students who take tutoring programs perform better than those who do not.

Others also argue that standardised tests are not always an accurate measure of a student’s performance and potential, suggesting that a student may not be good at taking long duration tests or that the pressure ends up getting to the student. In fact, many SAT tutoring programs focus on teaching students the format of the SAT and its specificity of questions and language as did CompassPrep, the tutoring program UNIS offered. For students who do not have access to these courses, it is much harder to meet the rigorous demands of the SAT. Often, it is not the content of the test that trips up a student, but how the questions and language are phrased. In recent years, the SAT has come to mean more with increasing selectivity of colleges, but on the other hand, with the COVID-19 epidemic and the 2019 College Scandal, how does the effectiveness of the SAT translate into real life?